The current crisis is not leaving me much breathing room to think ahead, but I’ve been doing my best to carve some time out in the past few weeks.  It hasn’t been much time, of course.  But, much like keeping this blog, I think it’s an important part of my work.  You can’t let all of your focus be on what happens in the next ten minutes, otherwise you will never be doing anything besides reacting.

So, with that thought, I’ve been trying to do some planning, to think ahead about what fall semester would look like for our program.  Will we be meeting in person at all, or will this period of social isolation continue?  Assuming that it does continue (and there’s certainly considerable research showing that it might, and perhaps should), what do we do?  How do we handle moving an entire program online not just for a few weeks, but for an entire semester? 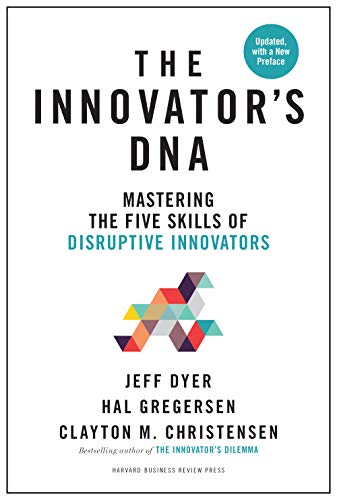 To spur my thinking, I’ve turned to some readings on “disruptive innovation.”  Overall, I think very little of disruptive innovation, and even less of the texts written about it.  The concept seems to have emerged at the intersection of lazy reporting and CEO worship.  But, we’re living in a very disruptive time, and I think reading widely can help generate new ideas, so I took a dive in with The Innovator’s DNA.  Well, I guess I’m mid-dive, since I’m only on chapter two.

Thanks to Amazon offering a $10 credit for buying a Kindle book instead of a paperback, I was able to get it for only $9, which I paid for with points from a credit card.  And I think that’s what’s keeping me from being upset with my purchase.

I don’t think I really have a problem with the book.  It’s…fine, so far, I guess.  If you’re into this sort of thing.  I’ve rolled my eyes less than I thought I would.

It’s less focused on the “move fast and break things” aspect of disruptive innovation than it is about what it means to actually think in innovative ways, which helped.  And there is an underlying assumption (stated bluntly in a few places) that anyone can be innovative, and it is not to be left to the realm of special geniuses.  The authors even do some work to link cognitive action and behaviors.  So those are all positives.

But there are some real negatives.  I won’t get into the specifics, but let’s just say that I’m not seeing that it’s going to stir up my thinking like I’d hoped.  That’s OK, of course—they didn’t really intend WPAs as an audience—but I’ll keep reading, and see what happens.  I don’t know that any “innovation” on my part is going to be all that meaningful in the next couple of weeks, anyway.  I think the important thing is that I’m getting into the habit of making time for thinking ahead, so it can get baked into my daily routine.