Earlier this week, I spoke in front of the Standing Committee on Education and Cultural Affairs in Augusta.  Ah, the things I end up doing as a WPA.

I should give a little context.  The committee is taking up L.D. 2072, which is a revision of parts of Chapter 132, the segment of law that deals with state standards for teaching and learning in Maine.

I think I described that correctly.  I know the basics are right: the state is revising its standards, and I offered testimony about those revisions.  Whether I am messing up the details of Chapter 132 and how it should be described is another matter.  Clearly I don’t speak legalese.

Anyway, I arrived at the Cross building (it’s an office building across from the Capitol) and spoke to about ten or so members of the state house and senate.  I read about two pages of testimony in support of the revised ELA standards (the rule change covers all standards, but ELA is the only thing I can give testimony on based on my expertise), and then I answered a few questions. 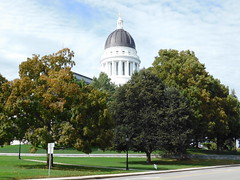 I’m not sure if what I offered was helpful to them or not.  I realized, when I was writing my testimony, that I don’t really understand what it is that legislators need to hear about when trying to make up their minds on a bill.  But I think it’s an important service that WPAs—or writing researchers in general, for that matter—should perform.  The revised standards are good, and they will help teachers in the state do their jobs better than the current ones.  As someone who has expertise in the teaching of writing, I felt like I was in a position to say something that could help legislators realize that.

That said, I wouldn’t say I enjoyed the experience.  The people I spoke with were wonderful, but I was aware of what I didn’t know about this context the entire time I was speaking—not a great feeling.

Like I said, though, I think it’s an important role that WPAs need to play, so it probably won’t be my last time in that particular saddle.  Maybe I’ll get better at it?  Eh, we’ll see.  It seems more likely I’ll remain rather incompetent at it—the standards only go up for review every five years or so, and I can’t imagine them needing to hear from me in any other capacity.